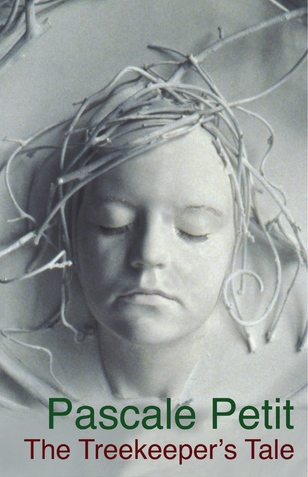 Well known for the fierce confessional imagery of her first three books, The Treekeeper’s Tale points towards another facet of this poet’s gift: an intense feeling for the natural world, allied with a personal response to historical incidents and to other lands. (Cover artwork ‘Treekeeper’ by the author )

She operates a glittery, concise, deeply responsible magic realism, which explores the exotic, the wilderness and the faraway scrupulously for their own sake, but also as leaping metaphors for self, and for the relationships of home. – Ruth Padel, Independent on Sunday

Reviews of The Treekeeper’s Tale

“Deeply entrancing . . . filled with vivid poems of colour and nature, inseparable features of Petit’s art. Her exploration of nature is startlingly original, even drastic . . . drives deep into a visionary world.”  – The North 44

“Our eyes are opened to the abundance and colour of the world, and that world seems remade as a life-giving habitat for the imagination.” – Kathleen Jamie and Maurice Riordan, Poetry Book Society Bulletin

Petit’s work acts as a necessary, original and refreshing antidote to the predominant poetry of metropolitan romantic situations and alienation. Her work has an ethereal quality, which rises above the banality and concern for surface of contemporary anecdotal poems. The Treekeeper’s Tale is full of otherworldliness, unnerving omen and the possibility of transcendence and escape. At times heavily poetic, Petit is rarely decorative; every horse, flower, silence or moon locates a feeling. Sensitivity is not explained, but located through imagination, through the making of worlds and the agents that inhabit them.’ – Jack Underwood Poetry London Summer 2009.

‘The Treekeeper’s Tale has impressive subtlety and range. It moves from lyricism through poems rich in imagery, inspired by painting, to Chinese translation, and from the coastal redwoods of California to the frozen steppes of Siberia…Pascale Petit writes imaginatively of the near and far in language that is fresh. The Treekeeper’s Tale is a colourful and exotic book, in which, in a phrase of her own, “Everything is dawn-new”.’ – Sarah Wardle New Welsh Review Spring/Summer 2009.

‘These extravagant poems… are painterly, exquisite, delirious, half-drunk on the sensational sights Petit has seen, real and surreal journeys into the ancient imagination of the world.’ – Bill Greenwell Stride Spring 2009

‘The poems in Pascale Petit’s fourth collection are located firmly in the outside world, in forests and rivers, beneath permafrost and in star-filled skies. But her poems are not simply observations of flora and fauna; rather, the many creatures that appear in her poems inhabit mythological landscapes and spark off imaginative narratives. These landscapes form a backdrop for subtle meditations about our sense of self, what it is to be at home in the world, and the wondrous diversity of life.

The book is divided into four sections. The first, The Treekeeper’s Tale, focuses on the enormous redwood trees that grow on the west coast of North America. The poet speaks from the canopy of these huge trees and her new perspective creates a heightened sensory awareness: ‘Silence has small sounds I have learnt to listen to with my skin – the sap’s slow rise up three hundred feet of xylem.’ The sibilance of these lines suggests the hiss of the fluid as it eases up the trunk and the spondaic ‘sap’s slow rise’ imitates its creeping pace. Although Petit only occasionally makes use of end rhymes, her poems are always pleasing to the ear. Within these tree poems many ideas reoccur, particularly that of the musicality of the forest. Each poem echoes and reverberates off the last, creating layers of sound and sense. Petit emphasises the need to allow time for listening and paying attention, until eventually, ‘we begin to see ourselves as part of the forest’. She isn’t anthropomorphising the redwoods so much as allowing the speaker of the poem to identify herself as part of the living world, and consider what she may have in common with all living things.

Although many poets have explored the idea of not feeling at home in the world from a human perspective, Petit broadens this concept to other living forms: an uprooted redwood leaves a ‘crater in the sky’, a wonderful reversal of the image the reader might have expected. The suggestion is that trees exist as precariously as we do, not least because of the threat of the chainsaw. In ‘Exiled Elm’ the tree’s seeds are ‘searching for new worlds’, hinting to the reader that perhaps nothing is truly at home on earth, since everything has only a brief existence before death.

The second section of the book, ‘Afterlives’, shifts its focus to frozen Asian landscapes. ‘Siberian Ice Maiden’, one of the longer poems in the collection, describes an exhumed body and is full of rich detail about the rituals of the original burial (‘a hole cut in my skull / to insert incense and pine cones’) and the luxurious garments the maiden is buried in: ‘these still supple thigh-high riding boots to protect my skin from chaffing against the saddle – all made it through the centuries unscathed.’

This is contrasted with the body now displayed naked in a museum, her clothes and ornaments behind glass. Petit builds a personality for the human remains, creating empathy with the person who is now seen as an artefact. Petit’s previous collections have been in the confessional mode and although the first-person voice still dominates this new collection, by speaking through Siberian priestesses and golden eagles among various other living creatures, these poems feel less autobiographical and rather more symbolic, whilst still being concerned with intense emotional experiences of the individual.

Many of Petit’s poems are sequences of enjambed couplets, allowing plenty of space on the page for her detailed imagery without breaking up the flow of meaning. She makes use of line breaks and very short lines to emphasise meaning and explores her subjects with precise and vivid language. She is an expert at the simple but dazzling image, for example describing newly opened white moth wings as ‘a book of frost’ and a salmon ‘in pyjamas of pearl and ash’.’ Vicky Paine Eyewear June 2009