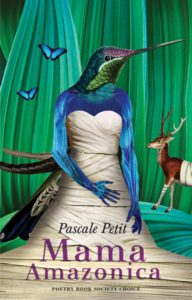 Winner of the 2018 RSL Ondaatje Prize

Shortlisted for the 2018 Roehampton Poetry Prize

Mama Amazonica is Pascale Petit’s seventh poetry collection, published by Bloodaxe in 2017. It won the Royal Society of Literature’s Ondaatje Prize 2018 – the first time a poetry book has won this prize for a work of fiction, non-fiction or poetry best evoking the spirit of a place, and was shortlisted for the Roehampton Poetry Prize 2018. It was also a Poetry Book Society Choice .

‘Mama Amazonica is an unforgettable read – rich with metaphor, the poems explode on the page with the multiple narratives of motherhood, illness, pain, and redemption. All of this set in a rainforest that is both mythic and vividly alive. This is a book that feels almost magical in its unlikeliness, and that for me is what made it a clear winner.’ – Tahmima Anam (judge for the RSL Ondaatje Prize 2018)

‘The poems take you to a place where language feeds on language… no one writing in English today comes anywhere near the exuberance of Pascale Petit. Rarely has the personal and environmental lament found such imaginative fusion, such outlandish and shocking expression that is at once spectacularly vigorous, intimate
and heartbroken.’ – Daljit Nagra (judge for the RSL Ondaatje Prize 2018)

‘In Pascale Petit’s evocations, the Amazon rainforest comes alive, with human characters as much a part of nature as the creatures and plants living there – alluring
and frightening, violent and vulnerable, dangerous and endangered. A feat of imaginative intensity, this is also an act of reckoning and reparation, in which deep empathy
for a disturbed mother is transmuted into the exacting beauty of poetic language.’ – Eva Hoffman (judge for the RSL Ondaatje Prize 2018)

‘Pascale Petit’s Mama Amazonica powerfully twists together fantasy and experience.  Over a sustained sequence of poems, Petit transfigures her mother’s desperate and disturbed life through fabulous imagery of the rainforest and its flora and fauna, moving towards a kind of extreme, Ovidian release into metamorphosis.  It won the Royal Society of Literature Ondaatje Prize this year, a first for a book of poetry.’ – Marina Warner, The Tablet (Books of the Year 2018)

‘Magical’ collection of poems about mental illness and the beauty of the rainforest scoops £10,000 Ondaatje Prize’ . Read The Telegraph‘s report here

‘Petit won [the RSL Ondaatje Prize] for her glittering and breathtakingly fearless book of poems, Mama Amazonica, which marks the first time that poetry has beaten novels and travelogues in this category… In just 112 pages, Petit creates a work of indelible power and tragic, dramatic force…She is, it seems, an explorer of the imagination later shaped by the wild places she sought out, and through her poetry she changes how we see and understand the non-human world. ‘ – Nilanjana Roy Financial Times Read the full review here

‘Beautifully sad, the imagery inexhaustible, the sorrow and torment both tempered and sharpened by the relish for language and the ingenuity of the imagination.’ – Simon Armitage on Mama Amazonica

‘Pascale Petit’s dark collection, Mama Amazonica, reaches into my heart to squeeze and squeeze. These are epic, achingly beautiful poems of love, abuse and self-betrayal that are, ultimately, a celebration of the glorious tenacity of life in multitudinous shape-shifting form. That these multifaceted poems simultaneously expose, in microscopic detail, the horrors of the dysfunctional family, while unmasking our patriarchal culture’s violation of Mother Earth, is nothing short of genius, and is what lifts Mama Amazonica into a poetic stratosphere of its own.’ – Sophie McKeand, Wales Arts Review (Best Welsh Books of the Decade, 2019)

‘This is a major literary feat, and this a brilliant sequence of poems. It burns in its own supranatural light.’ – Tim Liardet & Vona Groarke, PBS Bulletin

‘Radiant, and viscerally evocative… this image confirms the value of Petit’s work… in Mama Amazonica to make poems that are as radical as they are necessary – because they enable us to see in new ways.’ – Alice Hiller, The Poetry Review

‘The intense jungle colours and human-animal metamorphoses, the lush vocabulary of exotic fauna make for a linguistic richness that is uncommon in current British poetry…the overall effect of Pascale Petit’s metaphorical leaps is a powerful suggestion of common ground between the exploitation of women and the rape of the earth.’ – Yvonne Reddick, Times Literary Supplement

‘Pascale Petit’s haunting collection of poems that deal with her mother’s illness, Mama Amazonica (Bloodaxe), imagines a psychiatric ward in the rainforest, and does what all poetry dreams of doing – turn the wound into a feast, the trauma into a blossoming.’ – Tishani Doshi, Open Magazine (Best of Books, 2018)

Mama Amazonica is set in a psychiatric ward and in the Amazon rainforest, an asylum for animals on the brink of extinction. It reveals the story of Pascale Petit’s mentally ill mother and the consequences of abuse. The mother transforms into a giant Victoria amazonica waterlily, and a bestiary of untameable creatures – a jaguar girl, a wolverine, a hummingbird – as she marries her rapist and gives birth to his children. From heartbreaking trauma, there emerge luxuriant and tender portraits of a woman battling for survival, in poems that echo the plight of others under duress, and of our companion species. Petit does not flinch from the violence but offers hope by celebrating the beauty of the wild, whether in the mind or the natural world. The cover design is by Dragana Nikolic.

‘Since 2001, when Pascale Petit published The Zoo Father, her greatest, most singular achievement has been to tackle difficult subject matter head-on while simultaneously distancing herself from it through the use of exotic metaphor. The distancing is crucial. It lies at the core of her method, and has enabled her to procure poems of a raw, almost ecstatic, beauty and, to paraphrase Ruth Padel, to write the unwritable. In this, her seventh extraordinary collection, possibly her most integrated book so far, this sort of elongated lens is much in evidence… This is a major literary feat, and this a brilliant sequence of poems. It burns in its own supranatural light.’ – Tim Liardet & Vona Groarke, PBS Bulletin.

‘Pascale Petit manages to do the impossible, weaving together a story of trauma, illness and tragedy and steeping it in the natural world, transforming her troubled relationship with her mother into a story of the Amazon rainforest. It is a feat both stylistic and imaginative, and the result is something utterly original.’ – Tahmima Anam, judge for the RSL Ondaatje Prize 2019

‘The intense jungle colours and human-animal metamorphoses, the lush vocabulary of exotic fauna make for a linguistic richness that is uncommon in current British poetry…the overall effect of Pascale Petit’s metaphorical leaps is a powerful suggestion of common ground between the exploitation of women and the rape of the earth.’ – Yvonne Reddick, Times Literary Supplement
click here for the online review: Asylum in the Amazon

‘No one I’ve read writes like Pascale Petit. The way her densely wooded imaginative space, seemingly inescapable and full of vibrant, beautiful predators, spans multiple collections as a poetic theatre is by itself a remarkable achievement. It has not only been the punctum of multiple collections without feeling overworked, but seems to gather new dimensions in Mama Amazonica, its human and bestial subjects interweaving more fluidly and powerfully than ever.’ – Dave Coates (read the post here)

‘For those who have Pascale Petit in their pantheon of favourite British poets, her seventh collection, Mama Amazonica, will not disappoint. It vibrates with images that run before you like the last picture show… It is a portrait of art itself, though it be Coyoacán or Peruvian. The world is aroused, her imagination has widened the myth and the tropical groves hum.’ – Lin van Hek, Quadrant

Picture my mother as a baby, afloat
on a waterlily leaf,

a nametag round her wrist –
Victoria amazonica.

There are rapids ahead
the doctors call ‘mania’.

For now, all is quiet –
she’s on a deep sleep cure,

a sloth clings to the cecropia tree,
a jaguar sniffs the bank.

My mother on her green raft,
its web of ribs, its underside of spines.

I’ll sing her a lullaby,
tell her how her quilted crib

has been known to support
a carefully balanced adult.

My newborn mama
washed clean by the drugs,

a caiman basking beside her.

Depression is a black caiman
lying on the sand,

mud-slicked from the deep,
impassive in her armour.

Nothing can get through to her,
she’ll lie there for hours, unblinking.

How to explain then
the appearance of butterflies?

Sparking flambeaux, snowy-whites,
at the corner of her eyes,

as if the beauty of the world has come
to perch on her, to drink her tears.

Poems from the book have appeared in numerous magazines, including www.granta.com, New Humanist, The Normal School, Ploughshares, Poem, Poetry, Poetry London, The Poetry Review, and Quadrant. The manuscript in progress was awarded an Arts Council England grant, to complete the book and for a trip to the Peruvian Amazon.

An essay about Mama Amazonica, ‘Poetry as Exorcism’, was published in the spring 2015 issue of Mslexia:

Read the essay here, click on images to enlarge: 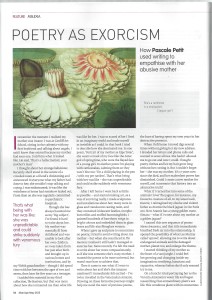 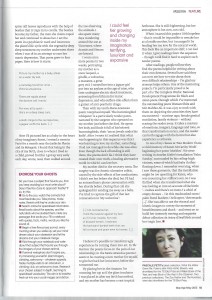